Shwetha Menon is the first and foremost television anchor in the Malayalam reality TV space. She began her first major TV anchoring opportunity was in Zee TV with Arshad Warsi for Razzmatazz but it was in 2007-08 that she debuted on Malayalam television with Star Wars on Kairali TV, popularising reality television in the language television space with her panache and style. Two years later, she took over a show Honeymoon Travels mid-way in Surya TV to get back into serious reckoning as an anchor.

Then came her biggest show yet, Veruthe Alla Bharya on Mazhavil Manorama channel which became a household hit instantly for its original message and family values. The show became a raging hit, lifting the fortunes of the fledgling channel and its TRP sky-high. At present, she is a popular judge on the highly acclaimed comedy show, Comedy Stars on Asianet.

Shwetha is in discussion to anchor or handle few more exciting shows with her set of value addition. 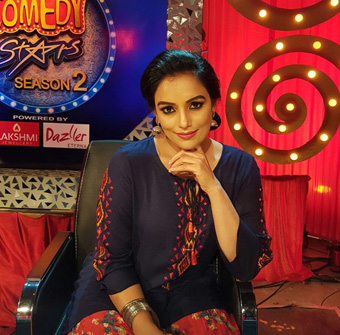